April 21 & 22, 2016: Woke up in my little nook of a sleeping spot to a brilliant full moon!  The wind had died down too making it a beautifully spooky night for hiking!  Made some coffee and had a quick protein bar breakfast under the moonlight.  Packed up and started back up the Sunrise trail at 2:30 am turning my headlamp on low because the night was so bright it was hardly necessary.  It was pretty chilly, even without the wind, and despite the hot of the previous day.  The desert is cold at night… .   But, bundled in my clothes and rain gear, buff over my ears and fleece gloves on the hands, the hike started out cozy and perfect.  The relatively flat high desert quickly descended into Chariot Canyon, and in the moonlight I could tell I was on some steep ridges going in.  At around 5 am, I found the campsite Alicia and Pine were headed for the previous day at the bottom of the canyon.  I was just starting up the other side of the canyon when I noticed another hiker’s headlamp coming up behind me.  “Good morning,” a whisper said, trying not to wake the campers below.  It was Pine!  I told him to hike ahead of me as I was warming up coming out of the canyon and needed to strip off the rain gear and gloves.  The canyon was gorgeous as the sun slowly rose.  I passed a hiker who had had a “dry night” (run out of water) at the top of the canyon but only had 4 or so miles until the next water source to go.  Met up with Pine shortly thereafter, who was, as was his style, breakfasting after sunrise.  We chatted for a bit about our “non-hiker” lives and what brought us to the trail.  He also asked if I had seen Alicia at the horse trough.  Now it was time to worry — she had told him to hike ahead the previous day right before the turn off to the trough at Sunrise, but didn’t show for over an hour.  Turns out, Pine had left at around 4pm and I had arrived at around 5:30.  No Alicia.  But then she may have been camping stealthily along the trail as I had seen many cowboy campers (going without tent) along the trail during my moonlight excursion.

We came to the next water source, a pipe at the bottom of the next ridge with a shady tree.  We spent too long chatting with fellow hikers and let the morning wane.  The morning was quickly warming toward noon and the foliage of the canyon fading as we re-entered scorched desert.  My goal was Scissor’s Crossing — the junction of highway 78 and S-2 – that would provide a hitch into Julian where I could contact my pack’s manufacturer.  I had not planned on stopping in Julian and hoped that I could get a room booked.

As we left the water source, the trail turned into a climb up sandy, scorched ridges and burnt desert.  The day became brutally hot and it seemed like the next few narrow, steep, shadeless ridges would never end. At noon, hungry and tired (and on hour 10 for me) we stopped on a trail rock meeting up with the first few hikers in hours.  We ate and started descending into a valley of similarly seared desert sand and charred cacti following what appeared to be a dry stream bed.  Up ahead,you could see highway 78 and a tree line.

The tree line got farther and farther away as the day turned to temps in the 90s.  I began to think the tree line was a heat induced mirage.  We finally made it to the tree line and highway around 1:30.  Another hiker’s dad was there to tell us he was picking up his daughter at Scissor’s Crossing and asked if we needed water.  I actually had water, but was cross to learn that this was not yet Scissor’s Crossing!  We had a quarter mile to go. Limping along with broken pack and blisters in the heat to Scissor’s Crossing, the ride into Julian from there with five hikers, a loving dad, and a chihuahua was a very very welcomed respite.

Did manage to get a room at the Julian Lodge Bed & Breakfast, where they did hiker laundry FOR FREE!  Clean clothes!  Yeah!!!!!!!  But was also told there were no rooms available the next night.  I was hoping to hitch back to Scissor’s crossing anyway the next afternoon to camp and begin hiking by the morning thereafter.  I also saw Louis and Vivian at my lodge – friendly hiker faces were all over Julian!  I also sent out an email to my pack’s manufacturer, though i knew it would be too late to get a reply today from an east coast company.

After a one hour shower, I was so tired I didn’t even want to think of food, but joined Erica, Toby, and Jeremy (now trail name “Jameson” — yes because he bears the weight in his pack of a small bottle of Jameson) for dinner nearby.  After that, I went back to my room and called home. Turns out my aunt was moving, and, from the trail, I would have to change my legal address with all companies, my drivers license, and state bar associations.  Ugh.  Couldn’t take it. Went to sleep.

The next morning I got up and made my way toward the dining room to eat, eat, eat.  Jameson, from Switzerland, grabbed some frozen pancakes, put syrup on them and was ready to eat until I asked if he was really going to eat them that way- frozen that is. He hadn’t realized they needed to be microwaved before eating – we had a good laugh.   Went back to my room as check out wasn’t until noon and I needed to check for a reply from Zpacks — my pack manufacturer.  They had responded that my pack had been sent out without a design alteration that prevented the frame from puncturing the fabric supports – namely a piece of metal sewn into the fabric.  They told me they could send me a new pack down the trail once it was built (they are custom) but to cut up a soda can in the meantime and tape it to th fabric.  I would have to limp along with a trail fix until the new pack could reach me in Idyllwild, at least 75 hiking miles away.  The day was not looking bright.  Time for more sugar.

I then headed over to Mom’s for second  breakfast.  Julian is a hiker friendly – extremely hiker friendly – little gold rush town.  I enticed Pine to make the stop in precisely because Mom’s gives free pie to all PCT hikers.  Going in, and with full pack after checking out of my lodge, I was all too obviously a PCT hiker.  Several tourists from Europe stopped me on my way into Mom’s to ask about the hike — kind of felt like a celebrity!

Mom’s didn’t dissapoint — free pie (mine was “Bumbleberry” – blackberry, blueberry and huckleberry mix), free topping (ice cream of course), and a free drink (more coffee!) by showing my PCT long distance hiking permit.  After this delicious fare, I headed over to hiker central — Carmen’s Place.  The proprietor – Carmen – is a fabulous lady who helps hikers with EVERYTHING.  Dozens of hikers each day of the season can be found on her deck, eating her amazing burritos and nachos, drinking our hiker free beer, and getting our problems solved by the lady who knows everyone in town.  A soda can was waiting for me, but the suggested repair was a total fail.  The thin foil could simply not stand up to the pressure of the frame and simply kept ripping.  Pine got a hitch back to Scissor’s, but I was stuck trying to think how to get 75 more miles with a broken pack.  Carmen immediately started making calls to every seamstress she knew in town.  The seamstress for the fancy dress shop across the street would be away until 5pm.  I had no choice but to sit, eat nachos, and wait at Carmen’s.

At around 5, the seamstress returned to close up the shop and Carmen told me to run and catch her.  I took my pack and ran across the street, where the lovely proprietor and seamstress of Kathy’s Dress Shop broke gummed up two needles sewing the supports to the additional straps on my pack to make a more heafty support for the frame pole.  We then covered the ends of the poles in duct tape to try to make them less sharp.  Kathy did this all after hours when her shop was closed!  And — she would not take a cent from me for her troubles!  These are really amazing people in Julian and I hope to be back!  (I also met Milley — the shop’s sometime visitor — so cute!)

When all was said and done, it was around 7 pm.  I went back over to Carmen’s to get my trekking poles and hitch back to Scissor’s but Carmen was absolutely against a single girl hitching at night.  I relented, as earlier in the day, fellow hiker Greg had mentioned he had a room at the Appletree Inn a few miles away.  Carmen said that it would be no problem getting one of her wonderful employees to give me a ride.  About that time, in walked Lorian!  I hadn’t seen Lorian since we hiked out of Lake Morena together the third day!  She had hitched into Julian from the Sunrise Highway near the Sunrise Trailhead Watersource.  Eddy, her other half, was still hiking to Julian via Scissor’s.  Lorian needed to have her knee checked by a doctor and Carmen went right to work arranging her a ride to a doc the next day.  Lorian also needed a place to sleep.  I called to see if any rooms were left at the Appletree (as I doubted we would all fit in Greg’s room), and they had one room left.  Lorian and I sat and drank beer and bubbly until Carmen’s closed for the evening.  I got a photo opp with Carmen and Lorian and then Carmen and Daryl and then Chrisie drove Lorian and I up to the Appletree.  Greg met us outside and while Lorian stayed in Julian for her knee, Greg and I  planned to get up the next morning and hitch back to Scissor’s.  Good night sweet Julian! 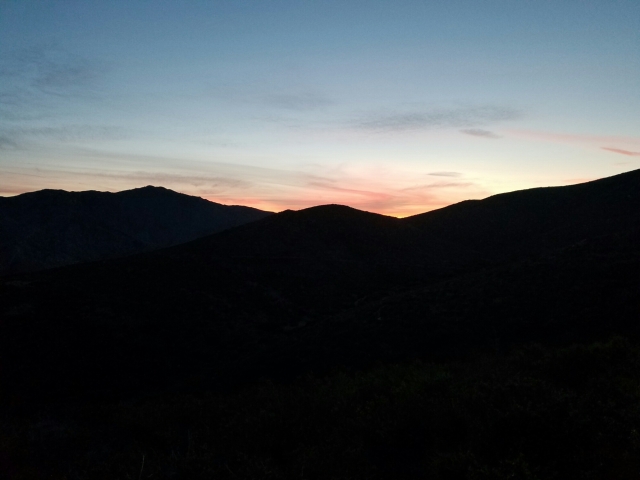 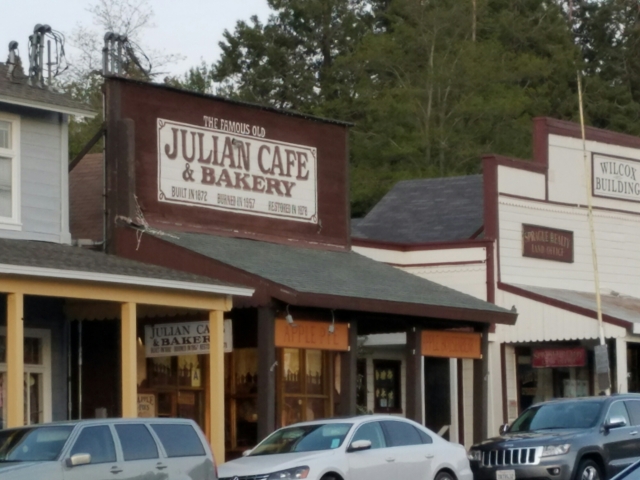 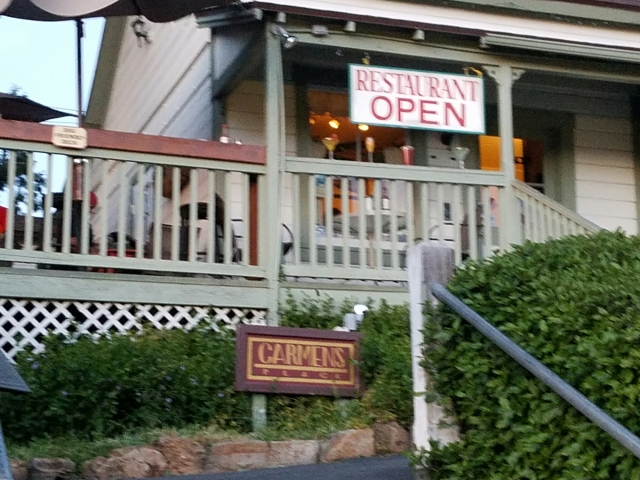